In August of 2008, then Acting-Chief Robert Kelleher asked for volunteers to research options for meeting the September 09' deadline imposed by the State. Representatives of all shifts as well as the EMS Training officer began the arduous task of investigation, interview, trail and putting out to bid, a system that would carry the Department forward for years to come. Early on in the process it was discovered that sarcina EMS, fire and inspectoral software from a collection of different vendors would likely cause added expense and difficulty. It was with this that the committee was tasked with finding a single source for the entire department's information gathering needs. After extensive research and a rigorous bidding process, Image Trend was awarded the contract.

In order to streamline the process of giving report to the hospital and returning Units to service as quickly as possible, each ambulance and Advanced Life Support fire engine was equipped with a Mobile data terminal. These military spec, "ruggedized" laptop computers were chosen for their superior reputation for reliability in the harshest conditions. The process of researching hardware, and putting it out to bid, fell under the scope of the committee. Trans-Cor's IT was chosen as the award winner due to their outstanding reputation and exceptional performance in this category. Trans-Cor's IT provides hardware and installation as well as mobile support to such organization as the Massachusetts State Police, the New Hampshire Department of Public Safety and the Maine State Police.

Both bids were awarded in August of 09' and work began immediately. Image Trend was able to customize the EMS program to the needs of Yarmouth including: 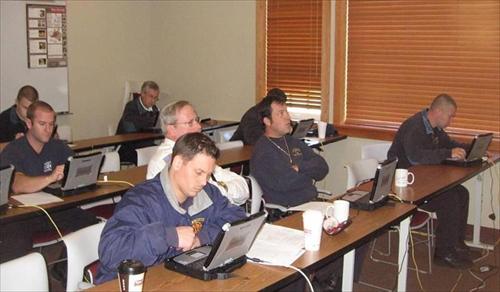 Training on the EMS portion of the system began the first week of November. Every member of the Department who provides patient care was trained over the course of 4 days. A representative of Image Trend was on location conduction the training, as well as assisting in customizing the system to the department's needs. The laptops were distributed among the stations and members were required to enter a number of fictitious EMS reports as a part of the training process. Beginning in December the laptop units will be carried in the ambulances to allow for real-time training. Patient care reports will still be submitted on the county wide "Standard Ambulance Run Form", however crews have the option of entering and printing the report electronically (time and circumstances permitting). This first week of December finds Image Trend back in Town conduction training on the Fire and Inspection side of the system as well as providing for administration staff to come up to speed on the billing, payroll and scheduling functions.
Initial indications are all positive. Every member has reported that their initial trepidation was alleviated by the ease of operation and thoroughness of the training. Trans-Cor's expert installation of the computer docking stations in the vehicles provide for robust and secure placement of the terminals with the bare minimum of down time for the process. Trans-Cor's professional and timely installation was commented on by every member of the Department. Our many thanks and kudos goes out to the installation team for providing exceptional service, without compromising the level of service to, or protection of the Town.
The culmination of 16 months of work will come to fruition on January 1st. when the system will "Go Live" and every Fire and EMS run will filled locally and reported to the State and Federal government electronically. The Department enthusiastically looks forward to providing a higher level of service to the community and utilizing these new capabilities in the future.